I’ve recently got back from ten days in paradise and I read some really amazing books. The more I read, the more reflective I seem to become.

And it was yesterday when I was waiting for my hairdressers appointment that I realised that I needed to say a big thank you to the hipster millennials, to Starbucks, to Costa.

For years at school and college I followed a stupid set of rules created by teenagers locked in a pack mentality.

I wasn’t allowed to use my pink rucksack because shoulder bags were the fashion and if I wore the rucksack I would be called Dora the Explorer or a geek.

I wasn’t allowed to wear a skirt because trousers were the in thing, skirts meant you were trying to flirt or be a slut.

Ties were long, not short. Socks were odd. Shoes were flat. You don’t go anywhere alone. The list was endless. But I followed them all desperate to fit in and not stand out.

Schools can be immeasurably tough, especially to someone who dares to not follow one of the rules.

But the constant ‘being in a group’ was the one I found the hardest to break out of.

And that’s where the title of this post comes in.

Everyone laughed and made fun of the sole workers in Costa tapping away on their keyboard, ordering pumpkin spiced lattes in Starbucks while updating their Instagram but what they have done, is make being on your own in a coffee shop absolutely and perfectly the norm.

And teenagers now-a-days as far as I have seen have a lot more confidence sitting in a cafe on their own. Granted they are staring at their phone, using it as a safety net because ‘God forbid anyone see you there, just sitting!’ but it’s a step in the right direction.

I recently read a book by Farrah Storr, my idol *fan-girling* called The Discomfort Zone and in it she talks about how people are to some degree a ‘social perfectionist’. She talks about these roles that we are fighting to constantly fulfil.

In the book she said: “But there is something we are forgetting: nobody cares. Not really. Certainly, not as much as we think.”

She goes on to explain that studies show that we overestimate people’s opinions of us and that we “let our opinion of what we think they think dictate the direction of our decisions”.

This thought was an absolute revelation to me and made me so aware of all the times I’ve made a decision based on what other people might think.

All of the times I had the opportunity to be authoritative at work but wasn’t for fear that someone might think I was a bitch.

The times when someone has been openly rude to me and I haven’t felt brave enough to say anything back.

The time I upset my mum by asking for a new school bag because my rucksack wasn’t COOL and I thought the other kids would laugh.

So after reading Farrah’s book (twice) I’ve found myself consciously thinking about the decisions I make and whether or not it is rational.

Yesterday, when I finished work I decided it was time for a hair change. I booked myself in for a patch test and when I got there the hairdresser said that my dead hair was too damaged to colour.

In my head I apologised to the hairdresser for having such ratty straggly hair and sorry for wasting their time but out loud I said “Oh that’s not great, what can we do about it?”

The hairdresser said I would need some length chopping off and then I could re-book a consultation. She also told me that the next appointment for a haircut and consultation was in an hour and a half.

Normally this would trigger an anxiety inside me  because, where would I go on my own for an hour and a half when I only have £5 spare and my phone was dead and I wasn’t wearing any make up and my hair had been officially described by a professional as dead straw!

I also had a slab of black dye behind my ear for a patch test and people were definitely going to think I don’t wash properly.

But I set myself up on an outside table, with my dirty ears and straggly hair and watched the world go by. I drank my hot chocolate (the black forest gateau one is back by the way, yum) and let everyone stare. 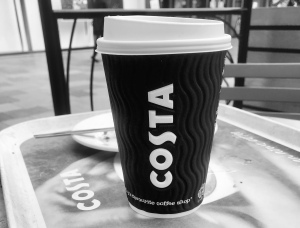 No one stared by the way.

No one even glanced in my direction.

The barista’s barely even stopped their conversation between each other when I ordered my drink.

And then when I went back to hairdressers, I got my straggly ends cut off, and walked out with a confidence that I had never felt before. Not because of my new hair (although that did help) but because the only thing I need to care about is what I think and feel, not other people.

So thank you coffee shops and Farrah for creating a world where I can be exactly who I am without needing a comfort blanket in my everyday life.

Also everyone should read The Discomfort Zone. Buy it here!

(not affiliate link or ad just love the book! ) 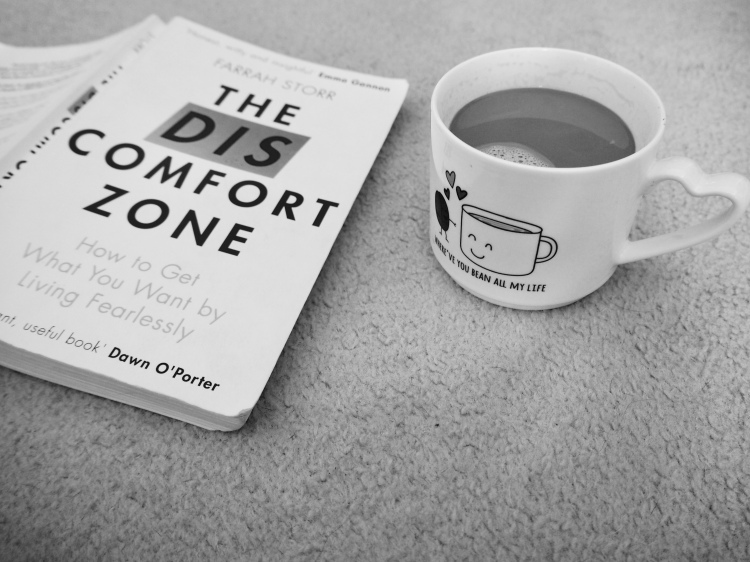